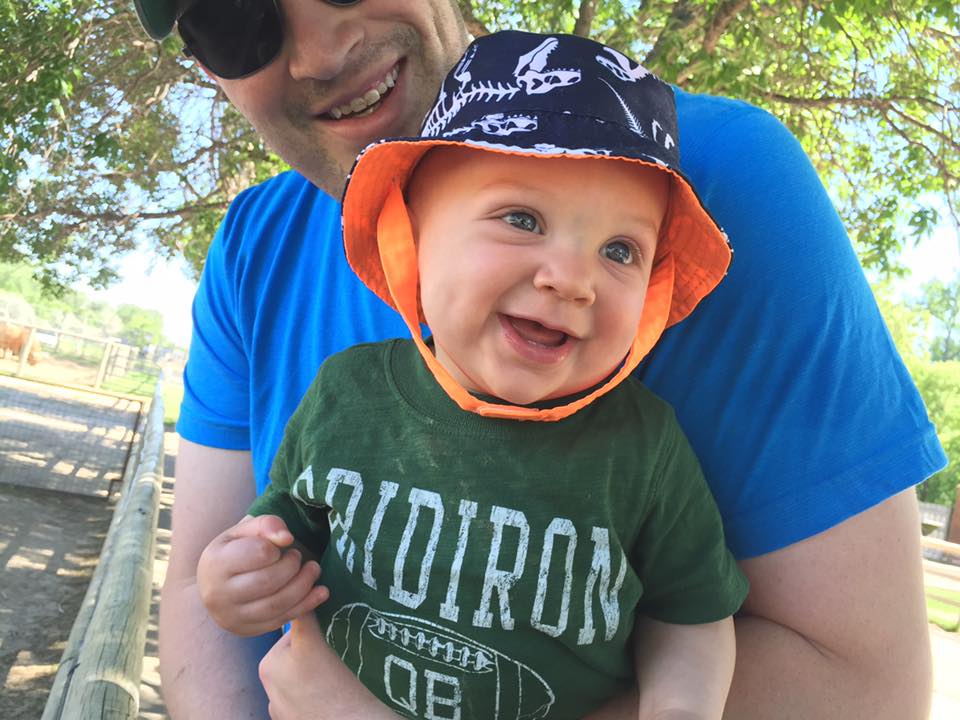 My outlook on life completely changed nine months ago.

The reason was Grant Bennett Monke. He came into our lives last September as a 9-pound, 22-inch newborn baby.

Now he’s a 31 inches, 22 pounds and is a speed-crawling cruiser who leads us on many chases around the house.

Grant is a smart little charmer who loves to laugh and smile, enjoys taking apart his toys, having books read to him and then flipping through them himself.

The news business, as some of you probably expect, is stressful. Days can be long, busy, and equal parts infuriating and invigorating. But everything changes when I walk through the front door and Grant looks up at me, smiles and says “DaDa!”

As I celebrate my first Father’s Day today with Grant and my wife, Sarah, it’s amazing to reflect on the changes we’ve had to make in our lives because of this big little guy.

The first three months went pretty well. Aside from a couple get-thrown-in-the-deep-end moments, Grant was great as an infant. He even flew on an airplane like a champ over the New Year’s holiday.

After that, things got more interesting. We watched as his personality started to form and he lit up the lives of everyone around him.

Now, as he starts making that transition to toddlerhood, we’re able to incorporate him into the lives we lived before he came around.

Going to events like Friday’s Bakken BBQ are still fun. They’re just a different kind of fun. I ran into some of my single buddies who were drinking beer and carousing, while I was on the hunt for baked beans and one of the juicier porks being served because, well, that’s what Grant can eat at a BBQ.

Though my industry works on daily deadlines, there’s times when I have to drop everything and rely on my wonderful staff because Grant needs to be taken to an appointment or picked up from day care. (Special shout-out to Holly for doing an excellent job!)

Then there’s times like last week, when Sarah had to go on a four-day work training trip and I’m left trying to balance work in an election week and being a dad to a teething 9-month-old. Thankfully, Grandma was available on Election Night to help pick up some slack.

But it’s all worth it, because being a dad is fun. Though there are some nearly sleepless nights — including a couple last week — and some very, very costly purchases that go along with having a kid, especially one that has grown nine inches in nine months, being a father is something I wouldn’t trade for the world.

The most exciting stuff is what you learn along the way.

I’ve discovered “Daniel Tiger’s Neighborhood” or “Paw Patrol” and a remote control without batteries, or even a water bottle, can create a perfect 30-second distraction.

Sarah has taught me the beauty of strategic interior decorating, wherein a brick fireplace can still work for the room despite being covered with padded alphabet tiles, and how arranging our couches just right can create the perfect play area.

I know now that if I want to make my son laugh, I only need to spin him around, or bust out a rhyme or a funny word. For some reason, the word “explosion” said in just the right way makes Grant double over with laughter.

Grant doesn’t stop learning, either. He started talking a couple months ago and knows a few words.

He’s learned that Go-Go Squeeze, Cheerios and pancakes are pretty awesome. Almost simultaneously, he found out that his dog, Noodle, will eat just about anything he drops to him.

Everyone says having a child changes your life. And it obviously does. But really, it’s how one chooses to raise their children that determines what kind of a parent they really are.

Me? I choose to be the best dad I can, whether that’s running to Wal-Mart at 10 p.m. for diapers, working until midnight on a Thursday so I can spend time with Grant on the weekend, or simply being there for him when he needs me or getting him the things he wants and needs.

Because I cannot imagine a life that Grant’s not a part of.