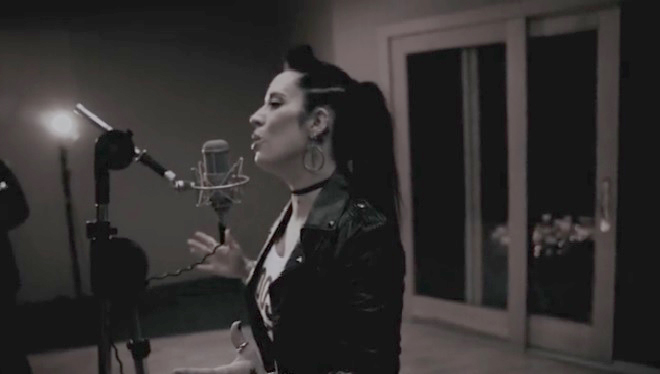 Kat Perkins is back in North Dakota on a week that her newest song is making waves in the music industry.

Perkins, a Scranton native, was featured on the homepage of music magazine Rolling Stone’s website throughout Tuesday for an article about the release of her song “Angels.”

Perkins recorded “Angels” as a tribute to her friend, the late singer Christina Grimmie, as well as the victims of the Orlando, Fla., nightclub shootings. She said Tuesday afternoon that the response to the song — which was written by her boyfriend, producer and guitarist Eric Warner — has been “overwhelming.”

“It was one of those cool, spontaneous moments for us to do what we know how to do and that’s make music and help people heal through music,” Perkins said. “It was helping us heal at the same time. It was a cool moment to see it come together like that and make an impact on others, because that’s what we set out to do.”

Perkins’ popularity rose after she appeared on season six of NBC’s singing competition show “The Voice.” There, she met Grimmie. The two were not only competitors but roommates who became fast friends.

Grimmie, a 22-year-old Christian pop singer, died June 11 in Orlando after being shot while signing autographs following a concert. Her shooter, 27-year-old, Kevin James Loibl, took his own life.

Perkins said “Angels” won’t be released on iTunes until Wednesday, at the earliest. When it is, proceeds from the single’s sales will be given to Grimmie’s family through a GoFundMe website. Perkins said Grimmie’s mother, Tina, is not only dealing with the loss of her daughter but has also been fighting cancer.

“She was everything to that family, not only as a daughter and an awesome human being, but her career was something that was taking off,” Perkins said. “They moved to L.A. for her. They fully supported her passion for making her music.”

Perkins will perform “Angels” live for the first time Saturday during a concert that begins at 3:30 p.m. at Medora’s Burning Hills Amphitheatre.

Leading up to the concert, she’s hosting the Badlands Rising Star Music Camp. It begins today with 28 singers from across the upper Midwest and as far away as California.

Perkins will coach and mentor the campers throughout the next three days. They’ll then perform as the concert’s opening act and alongside Perkins during her concert.

“It felt so right,” she said of the camp. “I’ve never been so excited about something in my life. Now in the light of the last week or so, it’s kind of a shining light in my life and I feel like I can carry on a really cool legacy for not only myself but for Christina and the other musicians to help our young ones not only become better singers and performers, but to be better people and to be kind and choose love.”

Opening act: Participants of Perkins’ Badlands Rising Star Music Camp, which is being held this week in Medora.

Online: Visit www.thedickinsonpress.com to watch the music video for “Angels.”