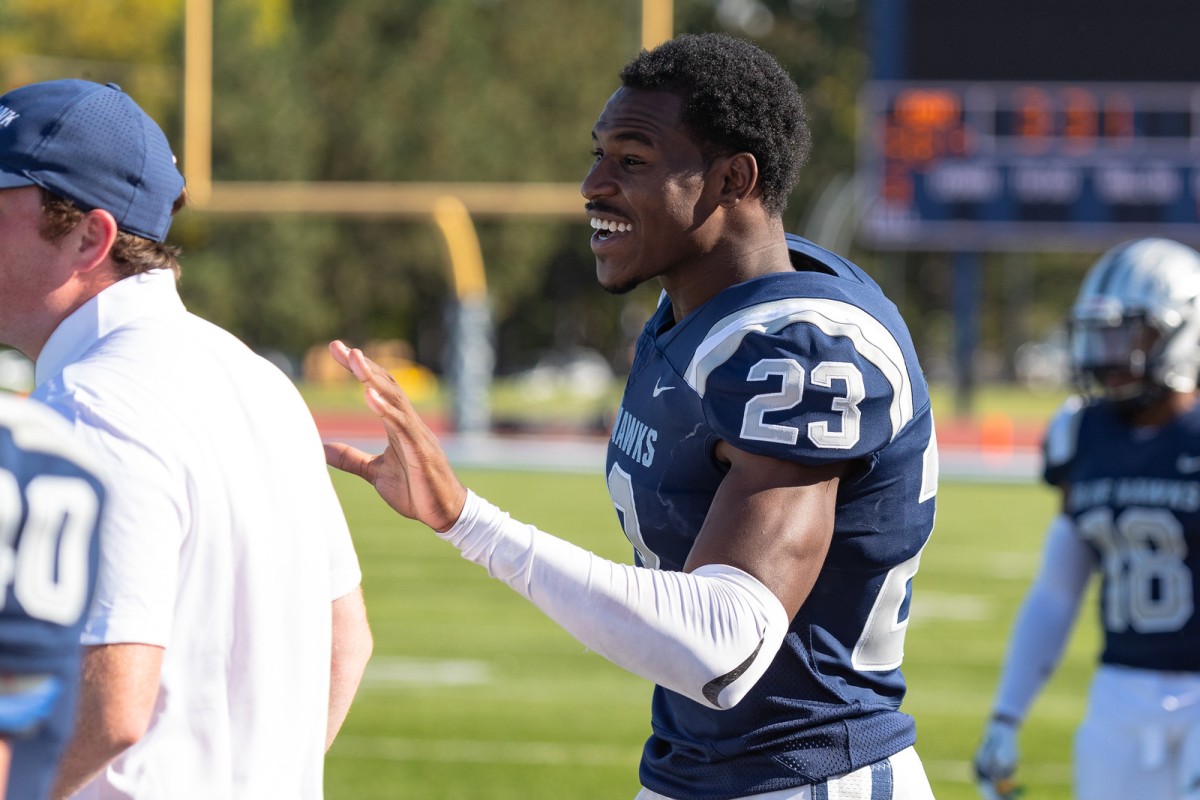 Jay Liggins was 11 years old when he left Memphis, Tenn. He remembers it was a Thursday.

Just four days earlier, his mother had made an abrupt decision to move he and his 10 siblings across the country to escape inner-city violence and find a hometown more suitable for raising a large family.

Of all places, they ended up in Bismarck, N.D., a city one-tenth the size of Memphis in a state none of them had ever been to and knew little about.

“It was such a random decision,” Liggins said.

Yet it was one that became incredibly fateful to Liggins’ future, despite numerous challenges he would end up facing along the way.

Later this month, the former Dickinson State University standout cornerback will likely get an opportunity to be the first Blue Hawk signed by a National Football League team.

“It’s an opportunity of a lifetime,” Liggins said. “It’s something I wanted to do, and the fact that it’s in front of me, I had to grab it.”

DSU football coach Pete Stanton said he has had conversations with about 20 NFL teams since the start of the 2018 season. He said most teams he has spoken to consider Liggins a “high-priority free agent.” That means he’s considered unlikely to be selected in the NFL draft, but is talented enough to warrant an opportunity to make an NFL roster by signing as a rookie free agent after the draft is complete.

Liggins, however, knows this opportunity depends almost entirely on how he fares during his pro day workouts. He was invited to North Dakota State University’s Pro Day on March 28.

There he’ll run drills and do workouts alongside players from the defending NCAA Football Championship Subdivision champion Bison — a team who never recruited him — with the hope his measurables impress scouts as much as his highlight reel did.

The better Liggins does during his Pro Day, the more likely it is he will sign with an NFL team when the draft concludes April 27.

Stanton said most NFL scouts believe Liggins, who is 6-foot-2 and about 210 pounds, has a shot at playing professionally because his size and skill level align with that of NFL cornerbacks. He’s known as a ball-hawk with a wide wingspan and large hands — all highly sought-after attributes in an NFL defensive back.

One huge sleeper in this draft is Dickinson State CB Jay Liggins. Don’t let the fact that he went to a small school make you sleep on a CB with great length, athleticism, and ball skills. I also found out he is going to be at NDSU’s pro day, so be ready for him to dominate there.

“He has as good of ball skills as I’ve seen or coached,” Stanton said. “He’s got the ability to go up and get it.”

Liggins piqued scouts’ interest early this season, Stanton said. Following a selection to the NAIA all-American second team as a junior, he turned heads with an acrobatic one-handed interception against Presentation College in the fourth week of his senior season. The play found its way onto YouTube and Facebook, and spread across social media sites.

Throughout the year, Liggins built up a highlight reel of long-armed pass deflections and rangy tackles. But, it wasn’t until the NAIA playoffs when he exploded onto scouts’ radar with a school-record four-interception game to help the Blue Hawks defeat Northwestern College of Iowa. He went on to earn first team NAIA all-America honors.

“He was always one that when the lights turned on the brightest, he was going to do his best,” said Thomas Sease, a former DSU all-America linebacker and one of Liggins’ best friends from high school.

If anyone knows Liggins, it’s Sease. They’ve been friends since their early teenage years, played football together for more a decade and were the only two Bismarck High School football players who also sang in the school choir. Liggins wasn’t even sure he wanted to go to college until Sease talked him into coming to DSU with him.

Throughout high school, Liggins lived with friends. His mother left Bismarck to return to Memphis before his freshman year. When she offered him the choice of returning to Memphis or staying in Bismarck, Liggins and his three older brothers chose to stay in North Dakota. All of them excelled despite their unique situation.

His brothers Dewayne and Bronte were also standout athletes for Bismarck High School, and Jay wanted to continue their legacy. O’Shea Neal, another of Jay’s older brothers, also decided to stay. DeWayne played basketball for Bismarck State College, Bronte played football for the University of Mary and O’Shea, after graduating from North Dakota State University, has started a career as an aspiring actor in Los Angeles.

“It was a huge decision at the time,” Liggins said. “It was just the way things worked in our family. It was tough to find a house for 11 kids.”

Liggins, by his own admission, said his athletic success at DSU was a product of becoming a stronger student.

He called his ACT score in high school “embarrassing.” It was low enough that NCAA Division I schools like NDSU and UND didn’t recruit him to play football. But because DSU didn’t have to adhere to NCAA academic recruiting standards, Liggins found his landing spot.

After struggling through his first couple of years at DSU, Liggins said everything started to click. He made the Dean’s List as a sophomore and stayed on it through the rest of college. Then he became a track and field all-American in the long jump. Finally, he made such huge strides in football that his play began warranting attention from pro scouts.

“It goes hand in hand, your schooling and sports,” he said. “If you’re focused and locked in in the classrooms, it’s easily going to transfer onto the field. When I figured that out, it really helped me understand what was required of me, and what was necessary for me to be the student-athlete I could be and wanted to be.”

While Liggins still has a semester left at DSU before he earns his degree in university studies with a minor in coaching, he’s putting school on hold to train for his NFL shot.

“There’s a huge risk involved with it,” Liggins said.

By signing with an agent to chase his NFL dream, Liggins gave up his amateur status, and almost certainly a chance to win a NAIA national championship in the long jump.

He has spent the past three months in the Dallas area working with trainers from RAW Power alongside other defensive backs trying to either be drafted or be picked up as rookie free agents.

You may have never heard of Dickinson State but soon you will thx to quite possibly the most underrated players in the #2019NFLDraft, Jay Liggins (6'2, 213). Learn more about ballhawk CB & 2x Track & Field All-American as he recently dialed into the show:https://t.co/DmH48uukWf pic.twitter.com/wOu7tXlki6

Mostly, Liggins is focusing on getting his 40-yard dash time locked in. He’ll need a strong time — at least 4.5 seconds or faster — to have a shot at making an NFL roster.

“Speed really gets you through the door,” Liggins said.

At this point, getting in the door is all Liggins wants.

The kid from Memphis who moved to an unfamiliar city, grew up away from much of his family and nearly said no to college is now on the brink of earning both his college degree and a shot at playing professional football.

Stanton and Sease both said Liggins has just the right personality to make it in the NFL if he’s given a chance.

“He’s got this, I don’t know, this unique charisma to him,” Sease said. “Obviously having overcome all that speaks volumes to him as a person, and what he can accomplish as football player and then even in life in general as a person.”