Note: This is part of a series of stories “Faces of Baker Boy” I write on some of our wonderful Baker Boy employees who have great stories to tell.

Ask Baker Boy Donut Team Leader Julie Bleyenberg to count the number of donuts coming off Baker Boy’s fry system and she would likely give you a hearty laugh. To get the answer, she could just call her kids. They’d have it figured out in no time.

Julie is a hard-working mom to three children. Two of whom, as she puts it, are “math geniuses.”

Her youngest source of maternal pride, 17-year-old William, will graduate from Dickinson High School at the top of his class Sunday with an unprecedented absence of pomp and circumstance as the Coronavirus Pandemic limits graduation celebrations and ceremonies nationwide.

Julie and her family will watch William graduate while sitting inside of their vehicle during open-air ceremonies on the Biesiot Activities Center football field. In the fall, William plans to join his sister, Carrie, at the prestigious Massachusetts Institute of Technology (MIT).

“The only thing that matters is we are together and we are healthy,” Julie said. “Nothing else matters. Also, dude, you got into MIT!”

END_OF_DOCUMENT_TOKEN_TO_BE_REPLACED

I spent a lot of time working from home last week because, unfortunately, our daycare provider was recovering from a lingering illness. That meant balancing all my newspaper business and this rambunctious little boy named Grant, who turned 1-year-old on Saturday.

Last week showed me how incredible it is that I’ve watched my son age and grow, both physically and intellectually, from birth to his first birthday. It seems like yesterday that we brought that snuggly little 9-pound, 2-ounce baby home from the hospital.

Grant has since transformed into a walking, babbling, wheels-always-turning waddler, and nothing in our home is safe. Especially our dog, Noodle, who’s still coming around to the idea of Grant.

When Grant embraced walking about a month ago, we knew nothing would ever be the same. The baby days were over. The toddler days had begun. Noodle, to his credit, has found that his only real safe space in the house is perched atop furniture or locked in his kennel.

As I worked from my home office in the corner of our basement, I tried desperately to balance watching Grant with assigning stories, checking pages and writing the occasional brief.

What started out as a somewhat clean area — his play zone is supposed to be in the opposite corner of the room — quickly turned into a minefield of toys, stuffed animals and books. There was no use picking them up or sorting them, either. Grant’s mission seems to be to play with every toy in his collection for a short time and then move on to the next.

When he found the 18-gallon plastic tote full of children’s books, his first thought was to remove each, glance at them for a couple seconds and then toss them aside for the next. Much of that pile is still sitting there on the floor as I write this.

His favorite books, appropriately, are from the “Bizzy Bear” series, which only makes sense since he has become an incredibly busy boy. We’re incredibly grateful that he has embraced books and already refuses to accept bedtime without mom and dad reading one of his “Bizzy Bear” books to him.

While Grant has changed, so has our little family. We wake up earlier, we work less, we take more time to eat together and we make sure that family — especially Grant — comes first.

It’s been a crazy but amazing first year as parents for Sarah and I, and like every other parent, we’re still learning on the job each day. But it’s worth it, just to see Grant’s big blue eyes light up and hear him laugh every single day.

Life seems to happen in threes for the Stevenson family.

Seth and Lauren Stevenson, of Dickinson, were married in 2013 after a three-day engagement just three months after they first met while working on an oilfield site near Camel’s Hump Lake.

So it only made sense that on Thursday, for the third consecutive year on the same exact day, the couple welcomed their third child.

END_OF_DOCUMENT_TOKEN_TO_BE_REPLACED

Jessina Kary said she wasn’t sure what had happened when her son, Isaac, stopped receiving his monthly book through the mail from the Dolly Parton’s Imagination Library program.

She wondered if there had been a mixup in her address after her family had moved. It wasn’t until later that Kary and hundreds of others learned the program had lost its funding in Dickinson, leaving nearly 600 children ages 5 and under without the free book they’d come to expect and enjoy every month.

“He loved it,” Kary said of 4-year-old Isaac. “The first book he ever got was ‘Little Engine That Could’ and we still love that one because he still loves trains.”

North Dakota First Lady Betsy Dalrymple helped announce the restart of the program Monday morning at the Dickinson Area Public Library and later read “Roar of a Snore” to a group of children.

“There’s nothing better that a community can do than to help give a gift to your children once a month,” Dalrymple said.

“I really want to tip my hat to them (WPX) for underlining the difference that this program can make in the lives of children,” Dalrymple said.

Imagination Library was launched in 1995 by Dolly Parton, a country music legend and actress, to benefit children ages 5 and under in her home state of Tennessee. It has since expanded to every state, Canada, Australia and the United Kingdom. Each month, children receive an age-appropriate book through the mail.

When Dickinson’s Imagination Library lost its funding, several interested parents and educators formed a committee to bring it back. With Dalrymple’s help and support from WPX, the program relaunched in April.

“There’s such a great need for this, so I’m glad we were able to get a committee together and get this going again,” said Lane Talkington, Dickinson’s children’s services librarian

Nearly 1,400 children in Stark County are eligible for the program, and the committee hopes to get every one of them signed up.

Chelsey Scherr, representing the Badlands Reading Council, works for the K.I.D.S. Program in Dickinson and said she sees the difference in children who are read to early and often in a world full of screens.

“What they really need is a parent who gets on the floor, plays with them and reads to them,” Scherr said.

Erica Crespo, part of the committee to help restart the Imagination Library in Stark County, held her 1-year-old son Vaile as they listed to Dalrymple and others speak.

She said she was disappointed when the program lost its funding around the time Vaile was born. Now that it’s back, they are signed up and awaiting his first book.

“It’s just an awesome program to promote literacy in our community,” Crespo said. “So many parents don’t know about this program.” 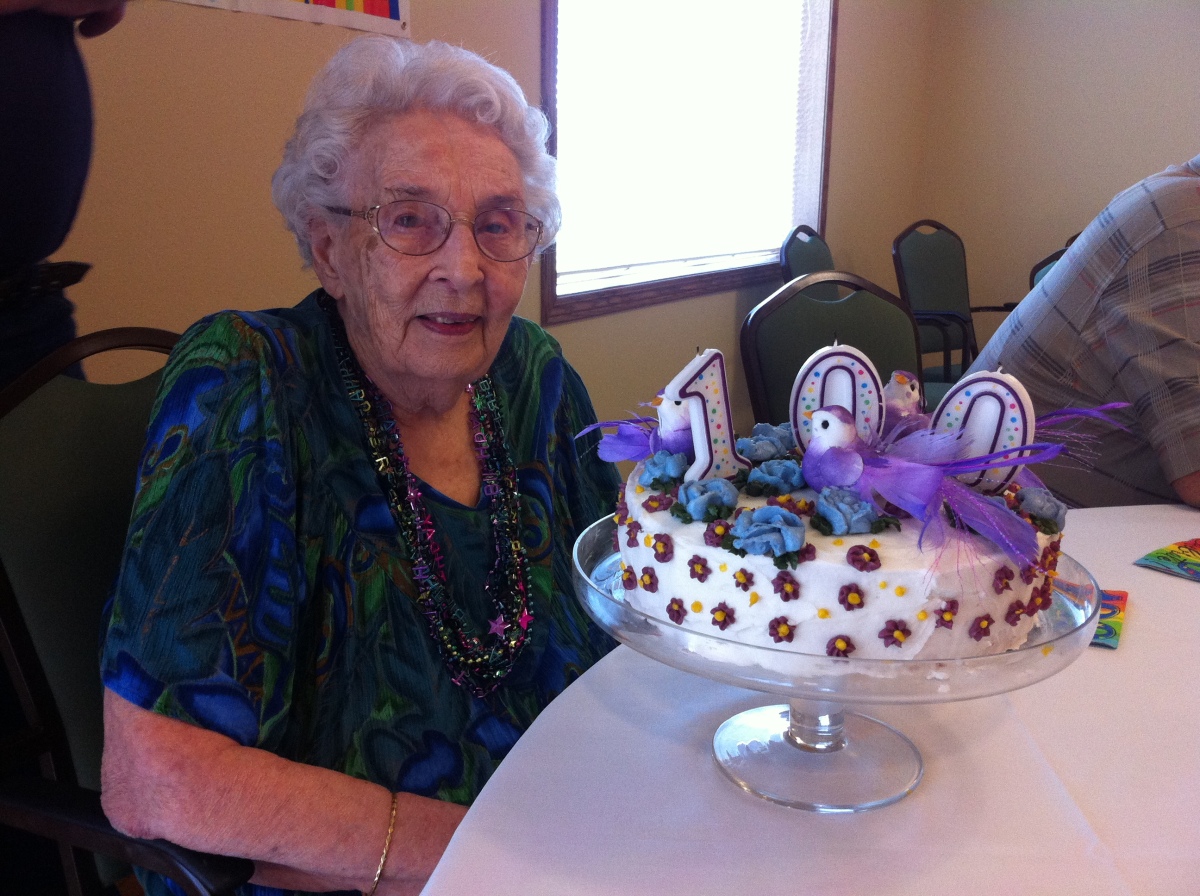 One-hundred and three years is a long time to be alive. Almost too long, one could argue.

But for Mildred Monke, it was a 103-year journey filled with more adventure and challenges than I or many others will likely ever experience in a lifetime.

In June of 1912, Mildred became the first Monke of her generation to be born in North Dakota. She grew up on a farm just down the road from the one where I grew up, but in a wholly different world. She was college-aged by the Dust Bowl years and knew the rigors of living in the country long before cars, satellite TV and Internet connected farm kids to the world.

Millie, a deeply religious woman, wanted nothing more in life but to meet her maker and to be with her family once again. Last Sunday, her wish finally was fulfilled when she passed away following a short but difficult bout with an infection. On Friday morning, we held her funeral at St. John Lutheran Church, where she spent several years as secretary and faithful parishioner.

She outlived two brothers and three cousins, and dozens of relatives and friends, and traveled the world long before the world was easy to travel.

Millie never married and spent 23 of the best years of her life — during which time many of her peers formed families and had children — giving her time and energy to others in India where she served as a Lutheran missionary, mostly taking care of children and the disabled for very meager earnings. I often wonder if the time she spent in India helped prolong her life exponentially, both in a physical and mental sense.

Because so many of our older generation here in Dickinson knew Millie for her work with the church and with various government agencies, last week I was asked several times how we were related.

Mildred and my grandpa Clarence were double cousins. Their fathers, both from Illinois originally, married sisters from their hometown and moved to North Dakota when their father purchased farmland for them. Though they were cousins, Mildred and Clarence acted more like siblings — especially later in life after so many other relatives had passed, including Millie’s mother Sophie at 101 years old.

So to us, she has always been “Great Aunt Mildred.”

It was obvious that the bond between my grandpa and Millie grew stronger as they came to terms with their mortality. When grandpa died two Christmases ago at 93, it left Millie as the last of her generation. When she was told of my grandpa’s passing, you could tell it hurt her. There were many times she told us and others that she was ready to meet her God.

Because I only knew her later in her life, most Mildred stories naturally were ones told to me by my family or her friends and acquaintances. But perhaps what impressed me the most about Mildred is that in her early 90s, she decided to sit down at a laptop computer and write a 110-page book, “North Dakota to India: Memoirs of a Missionary.”

She wrote of her time growing up on the farm. She talked about the conflict she faced as a 20-something who didn’t know what she wanted to do with her life — a problem just as real in the 1930s as it is today — which led to her decision to go to India. She wrote endlessly about the people who kept her there so long. She wrote of the cities and places she saw in the Middle East, including Mount Everest, and the trips she took across the United States, including to both Hawaii and Alaska in her retirement years.

Though her book contains many inspiring anecdotes and moments, Mildred perhaps summed up her life best in a sentence she wrote 20 years ago during her funeral planning. “Mildred leaves this world confident in the promises of her Lord and Savior, and in the great thanksgiving and praise for friends and relatives who made life meaningful and good.”

From the beginning to the end, Millie was a faithful woman. Faithful to her God, and to her family and friends. In many ways, she exemplified what she all hope to be.

We’ll miss you Millie. Thank you for everything!