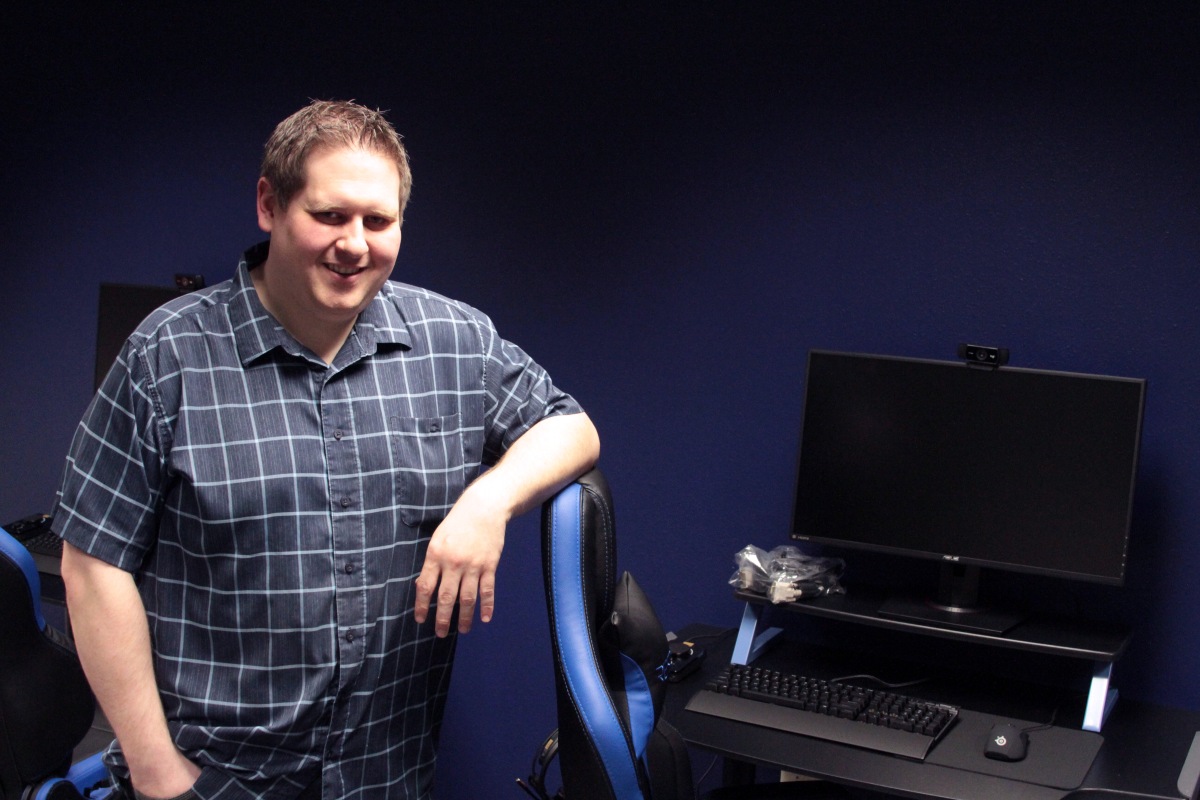 Tucked away in the back corner of the Dickinson State University Student Center basement, adjacent the cafeteria, is a room like many others on campus.

Seven desks, each with large computers and monitors, complete with webcams, line the room’s interior walls. Next to each desk sits large, comfortable-looking upholstered leather chairs. To the unknowing eye, the room appears to be nothing more than an upscale computer lab.

However, in the fall, the small room painted in DSU blue, white and gray colors will be the core of what the university hopes becomes its next extracurricular activity, and potentially even its next varsity sport.

The lab is home to DSU’s fledgeling esports program.

END_OF_DOCUMENT_TOKEN_TO_BE_REPLACED

The author and historian from Evanston, Ill., who is in Dickinson as a speaker at the Theodore Roosevelt Symposium, tore into the bark of cottonwood trees at the behest of Roosevelt scholar and symposium leader Clay Jenkinson.

As Jenkinson spoke about the process for how the trees will soon be used to build a replica of Roosevelt’s Elkhorn Ranch cabin, Knight wrapped her hands around the bark and started to pull. In all, she tore off about 10 feet of bark from a cottonwood sitting at the site of the proposed Theodore Roosevelt Presidential Library.

“The most fun work is where you see the results right away, and this is that kind of work,” Knight said with a smile.

END_OF_DOCUMENT_TOKEN_TO_BE_REPLACED

It’s a small but significant increase as the College on the Hill rebuilds its reputation under a new administration following years of enrollment and foundation scandals.

DSU President Thomas Mitzel said Tuesday that fundraising efforts by the DSU Heritage Foundation – formed last year after the old DSU Alumni and Foundation was forced into receivership by the North Dakota Attorney General’s Office – was essential in helping recruit new students to the university.

“You never want to have to start a new foundation, but by doing so I think we were able to target some very nice scholarship packages for students,” Mitzel said.

END_OF_DOCUMENT_TOKEN_TO_BE_REPLACED

A four-story building meant to provide off-campus housing to Dickinson State University students is sitting empty this semester, and neighborhood residents are trying to keep it that way.

Blue Hawk Square, located two blocks south of the university on West Villard Street, became another casualty of the DSU Foundation’s dissolution in June when Dacotah Bank acquired the property from a deed in lieu of foreclosure.

Now, the bank is working with DSU and the city to get students back in the 44-unit apartment building as early as the spring semester.

END_OF_DOCUMENT_TOKEN_TO_BE_REPLACED

Grossman, representing the state Thursday during a request for summary judgement hearing, said the “very critical” witness “has a lot of key information” and could incriminate himself through testimony. However, he did not name him.

The announcement caught Judge Herauf off guard, and he expressed surprise at the news.

“He knows more about anything that went on here than anyone else,” Grossman added. “He’s certainly entitled to do that to the extent that what he might say could result in criminal charges.”

Grossman added there are other witnesses beyond the man invoking the Fifth Amendment who have also given the state “some resistance” in request for testimony.

The announcement came after Herauf denied a motion for summary judgement requested by First International Bank and Trust of Watford City, an intervener in the case, regarding the validity and priority of debts owed to it by the DSU Foundation.

Herauf’s denial pushed all further arguments in the case to a scheduled two-day hearing Oct. 31 and Nov. 1, though Jon Brakke — the attorney for First International Bank and Trust — expressed concern. Grossman agreed that it wouldn’t be enough time for Herauf to sufficiently hear the entire case and that it could require more than a week.

The judge agreed and said the hearings will stretch out as long as they need to.

Herauf said he has found the case against the DSU Foundation to be entirely unique in North Dakota case law, as there are no true precedents.

“I’ve spent some sleepless nights on this and I’ve spent many hours reading the statutes,” Herauf said.

Herauf said while he wants the case to have an amicable conclusion in which both the defendants, plaintiffs and intervening parties can all reach reasonable outcomes, he’s doubtful that’ll happen.

“One side or the other is not going to be happy with how this comes out. That’s a concern I have,” he said.

He also expressed concern for the DSU Foundation donors, many of whose money cannot be accounted for by either the state-appointed receiver or Brady Martz accountants, saying they trusted their money to the foundation without any real ability to protect themselves.

“Then the DSU Foundation did a whole bunch of stuff that didn’t work out … and now we have this problem.”