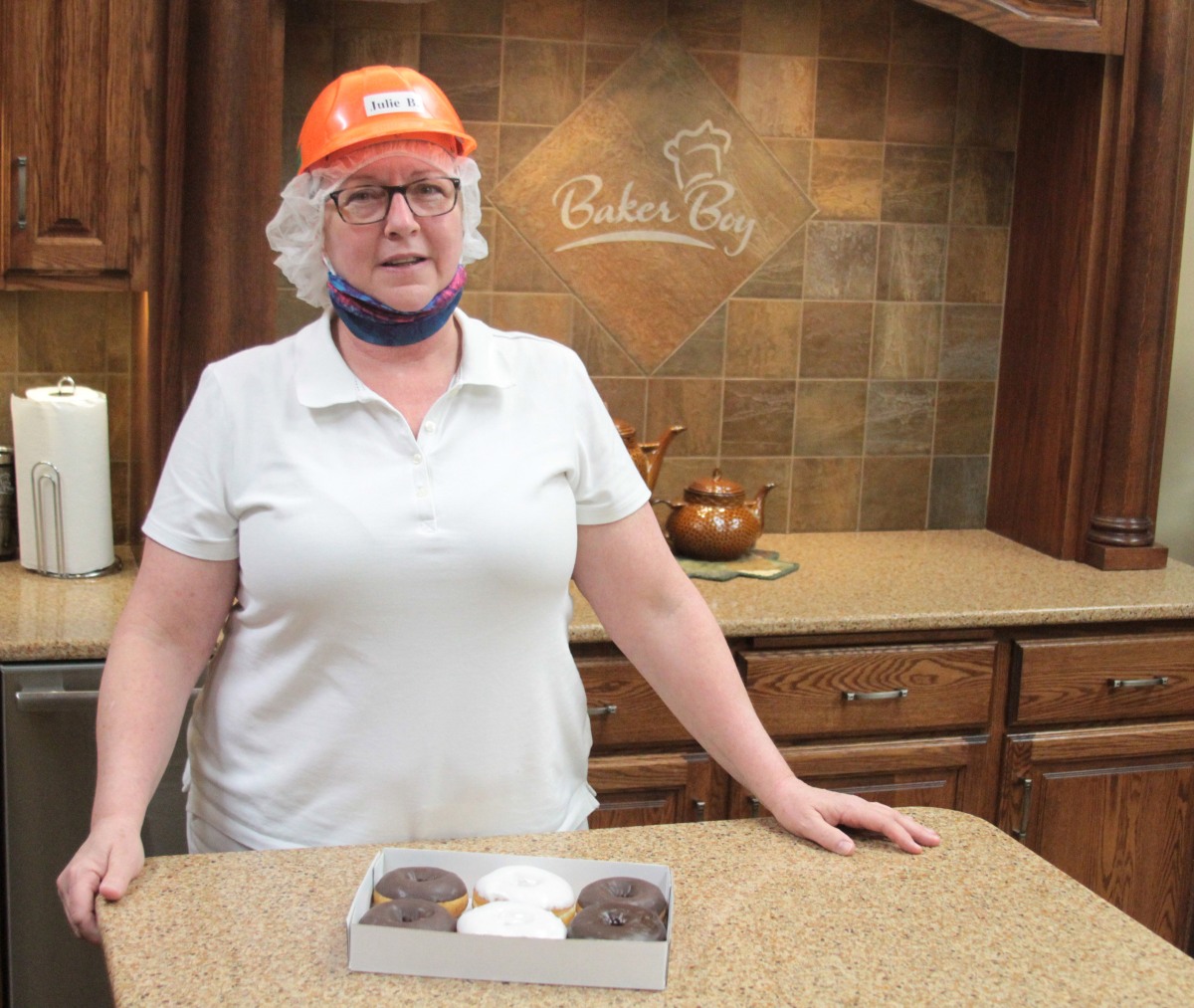 Note: This is part of a series of stories “Faces of Baker Boy” I write on some of our wonderful Baker Boy employees who have great stories to tell.

Ask Baker Boy Donut Team Leader Julie Bleyenberg to count the number of donuts coming off Baker Boy’s fry system and she would likely give you a hearty laugh. To get the answer, she could just call her kids. They’d have it figured out in no time.

Julie is a hard-working mom to three children. Two of whom, as she puts it, are “math geniuses.”

Her youngest source of maternal pride, 17-year-old William, will graduate from Dickinson High School at the top of his class Sunday with an unprecedented absence of pomp and circumstance as the Coronavirus Pandemic limits graduation celebrations and ceremonies nationwide.

Julie and her family will watch William graduate while sitting inside of their vehicle during open-air ceremonies on the Biesiot Activities Center football field. In the fall, William plans to join his sister, Carrie, at the prestigious Massachusetts Institute of Technology (MIT).

“The only thing that matters is we are together and we are healthy,” Julie said. “Nothing else matters. Also, dude, you got into MIT!”

“It was an emotional journey of ‘What are we going to do?’ and ‘How are we going to do this?’” Julie said. “The biggest challenge was first getting Carrie home, because of the distance. I wanted to get her home. We weren’t so much worried about anyone getting sick. The kids are healthy. They don’t have any compromised issues. But I didn’t want her to be stuck somewhere. That was my biggest fear.”

Julie said her family’s connection to MIT through Carrie allowed them to see the pandemic from a global perspective. More than 60 countries are represented by students at MIT – some of whom couldn’t go home like her daughter due to heightened travel restrictions.

“For our family, it was hard. But we have a broader perspective, given the circumstances that they’re in,” she said. “They really appreciated the fact that they could get home and they had family to go home to.”

The Bleyenbergs moved to Dickinson from southeastern Minnesota in 2014. Julie joined Baker Boy in the fall of 2017 as a team leader on the donut line. Her several years of experience running her own restaurant helped her have an immediate impact on the donut team.

“What’s more fun than making donuts for a living? Who doesn’t love a donut?” Julie said.

Baker Boy Director of Manufacturing Derek Rambousek said Julie’s positive attitude has been a reason for her success at Baker Boy.

“It doesn’t matter what is placed in front of her or how big the obstacle is,” Rambousek said. “She does everything she can to alleviate that obstacle, move the obstacle, fix the problem.”

When Bleyenberg arrived at Baker Boy, the donut fry system produced about 5,000 donuts an hour. Today, after a 2019 remodel and expansion, she’s leading the production of a state-of-the-art system that can reach 22,000 donuts per hour.

“It’s a challenge because of the pressure,” she said. “It’s a spotlighted line because of the financial investment that’s been on that line. It’s an honor they gave that line to me and allowed me to run it. It’s been a massive learning opportunity.”

Julie said the new donut system – which includes automated injection, glazing, icing and topping technologies – has given her a broader appreciation and knowledge of the manufacturing process.

And, like the pride she has for her children, Julie said she’s also proud to be on the team that makes Baker Boy’s innovative Magic Ring Filled Donut line.

“I really love what I do,” she said. “When I see those donuts going into the freezer and they’re beautiful and pretty, I know I helped make those. You see them on the posters. I have personal pride.”